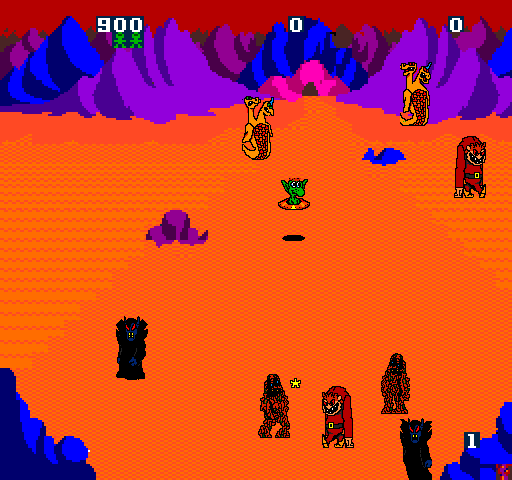 Wacko is a 1983 arcade game by Bally Midway. It debuted during the "Golden Age of Arcade Games". It featured a unique angled, or "sloped" cabinet design and a combination of trackball and joystick controls. The player assumes the role of Kapt'n Krooz'r, a small, green alien within a bubble-topped spaceship. The goal of each level is to eliminate the monsters, accomplished by shooting twin pairs in succession. As the player progresses, shooting monsters out of order creates mutants that must be unmatched before they can be eliminated. The player moves Kapt'n Krooz'r with the trackball and fires using either joystick. (A similar shooting scheme was used in Robotron 2084, although in 8 directions rather than 4.) Shooting a single monster stuns it for a few seconds. Krooz'r must then shoot the monster's twin before the first one recovers in order to eliminate the pair. Shooting a different monster, on later boards, results in the two becoming a mutant—the head on one joins with the torso on the other, and vice versa. To eliminate these mutants one must either "unmix" them, by shooting the same pair again, or produce a second set of identical mutants which can then be paired up with the respective members of the first pair. Eliminating a pair of mutants is worth more points than eliminating a pair of non-mutants.

Kapt'n Krooz'r is a green alien in an armed flying saucer, who is on a planet infested by monsters of various types. Shooting a monster with the ray-gun will cause the monster to freeze temporarily. If the second matching type monster is shot while the first is still frozen, then that pair disappears. Krooz'r may progress to the next level by ridding the screen of all monsters, and play continues until the Kapt'n is eventually overwhelmed and all three lives are lost.

The saucer is operated using a trackball to direct the saucer's motion, and a joystick which causes the saucer to fire in the given direction. After the initial screen, levels slowly add complications which increase the game's difficulty. An early obstacle is that shooting non-matching monsters will only cause the top halves of the monster to swap forming chimeras. Only shooting matching chimeras cause them to disappear.

At higher levels, shooting matching monsters cause them to split into baby monsters instead of disappearing. The baby monsters can't be removed until all of the adults have been dealt with. When the smaller monsters are removed, they revert to eggs which can still move around. These in turn cannot be removed until the last of the baby monsters are eliminated. If the current level is set in a cave, then the eggs that are shot may hatch into bats or demons, which cannot be destroyed until all eggs have been shot.